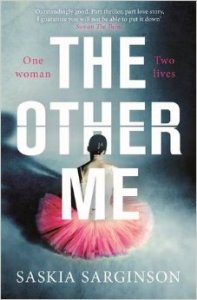 Like her other two novels The Twins and Without You, Saskia Sarginson’s The Other Me is characterised by its eminent readability and easy accessibility. The story is narrated in crisp and fast-paced prose, which hooks the reader almost immediately.

It is a coming-of-age story, at the centre of which is a young girl called Klaudia Meyer. The story traces Klaudia’s evolution not only from a child to a grown woman but also from confusion to emotional maturity. Along with Klaudia, there are two other characters who reach a new understanding of life and their place in it by the end of the novel, the brothers Otto and Ernst Meyer. At its heart, The Other Me tackles the question of belonging. Klaudia, Otto and Ernst are the three main characters in the novel, which spans two generations and moves between Germany of the Second World War and England of the late nineteen eighties and nineties. All three characters are on the same quest for belonging and acceptance, although their journeys are completely different from each other. Their stories begin in Nazi Germany; while the brothers live through the war as Nazi officers – Otto as the prisoner of war in Wales and Ernst as a soldier – Klaudia, a generation later, bears the social ramifications of their past. The story offers the reader a happy ending in a way, because the three characters do come to a final understanding. They finally realise that they need to forgive each other, and most of all themselves, to be truly at peace.

Most of the characters in the novel need the plot to come into their own, but Ernst Meyer’s character is so well rounded and fully fleshed out that he pops out of the narrative in a way. The reader is both repelled by him and drawn to him in almost equal measure, owing to his murky but truly tragic past. I felt that Otto’s wife, Gwyn Meyer, is another very interesting character. Her story stays with the reader because of the mystery that surrounds her, reflective of the shadowy place that women occupied in that era. Although the narrative leaves a little to be desired in the delineation of the internal or emotional landscape, which at times come across as a bit superficial, the external landscape of the Second World War and the London of late nineties is precisely drawn and takes the reader by the hand. The descriptions of the Second World War, which the reader accesses through Ernst’s diary, are transporting and truly chilling, displaying the author’s talent and her great attention to detail. The ending of the novel is both moving and happy. It has both a lightness and a heaviness to it.

The narrative style is crisp and entertaining, which makes the novel a very enjoyable read. However, some events that carry the plot forward come across as a bit contrived, one such event is the sudden reappearance of Shane after Klaudia’s burlesque performance, a kind of Diabolus Ex Machina, hampering the imminent reconciliation between Cosmos and Klaudia. In the end, although the novel may not provide any profound or revelatory insights on the human condition, it leaves the reader with a bitter-sweet taste that lingers for a while after the book has been put down.